As Panera Bread’s lead bakery market manager in Southeast Michigan for 20 years, Gary Waxler helped test new products locally before the corporation took the items nationwide. He also traveled the country to train lead bakers at other stores as products rolled out.

Today, Waxler is leading the product-to-market effort at Zaman’s newly formed Rising Hope Bakery and fulfilling a calling to positively impact the community dating back to his days coaching youth basketball in Redford.

“I fell in love with Zaman’s mission and the opportunity to give back to the community,” said Waxler, who joined Zaman after recently deciding to seek a role in the non-profit sector after more than 30 years working for corporations in the food and beverage industry, including Panera Bread, Sunshine Foods, and Dunkin’ Donuts.

The Rising Hope Bakery is part of Zaman’s growing workforce development initiatives and will provide onsite employment opportunities for graduates of BOOST’s culinary arts program while creating revenue to help sustain the organization’s work to empower women to break the cycle of poverty.

“With today’s busy lifestyles, food often revolves around convenience, so baking is a dying art form because fewer people can do it well. But there are many companies looking for employees with skills in the kitchen,” Waxler added.

Using Zaman’s recently opened commercial kitchen, Waxler is leading efforts to launch a product line of Zaman-branded cookies and secure distribution in stores throughout Southeast Michigan ranging from gas stations to large retailers. The cookies’ branding is in development, but will include naming to help customers understand that purchasing the cookies will support Zaman’s overall mission.

“People like buying products with a purpose that help the greater good, and these cookies and future bakery items will convey Zaman’s mission and message of hope,” Waxler said.

Hired in August, Waxler’s new role harkens back his days in Panera Bread training kitchens as well as his 40 years of coaching girls’ basketball in Redford, both of which helped his trainees and players grow in the kitchen and on the court, as well as in life.

“I used to see it when I was at Panera with trainees, starting a career in baking can be discouraging at first,” Waxler said. “But once you give someone hands-on opportunities to put their skills to work, they get confidence and flourish. It’s the same here at Zaman and it’s wonderful to be a part of.” 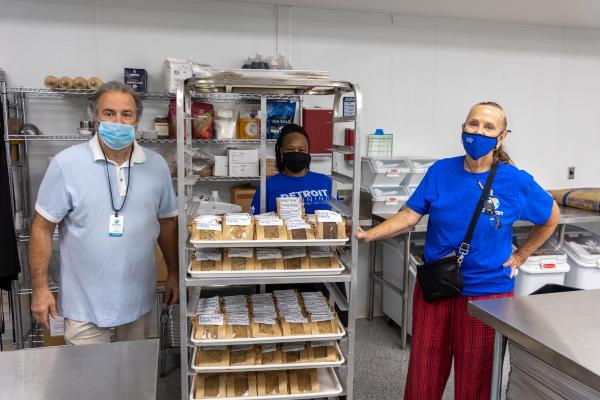