The hope Zaman creates is best represented by the potential of the children it helps lift out of poverty. That was a key message from the 16th annual Community Iftar Dinner, held on Saturday, April 9, at the Bint Jebail Cultural Center in Dearborn.

“When you have organizations like Zaman, it's important to recognize they are necessary to ensure that the next family who is in poverty is uplifted and they're able to break that cycle,” said Dearborn Mayor Abdullah H. Hammoud, who delivered the keynote speech and reflected on his family’s own journey to break its cycle of poverty.

Zaman CEO and founder Najah Bazzy highlighted how Zaman’s strength is in its donors that step up when poverty threatens to strip away the dignity of marginalized mothers and children.

“You shield the families from that poverty because you’re willing to stand up with good hearts as the great people you are and do something about it,” said Najah. She explained that increased funding from donors has increased the organization’s budget by over 60% in the past four years and is helping Zaman build a new client corridor with expanding workforce and employment opportunities onsite, including an industrial sewing center and the Rising Hope Bakery.

“We are on the cusp of a new era in workforce development as more clients can move to become employees onsite at Zaman or a business outside of Zaman,” Najah said. “The goal is to break the cycle of intergenerational so that the kids don't have to grow up the same way and suffer the way their mom did.”

She noted Zaman has helped more than 70 women secure employment and break the cycle of poverty, including 10 who have been hired onsite at Zaman at a livable wage since December.

The event marked Zaman’s first in-person Iftar dinner since 2019 due to the pandemic, and brought together approximately 800 Zamanitarians for a night of reflection and fellowship in celebration of the Holy Month of Ramadan.

Speakers throughout the program shared their “Why Zaman” moments, explaining their continued support for the organization. For Zaman Treasurer Dr. Nader Bazzi, he had seen too many children come to his dentistry practice lacking proper care.

“Zaman really fit in into my vision to improve the world, one child at a time,” Nader said. “Once you have a mother that's able to take care of their kids, the kids are then able to succeed and come back and give back to the community. It's a big circle and we're all part of it.”

Board Chairman Gehad Alawan, spoke to the altruism his parents instilled in him growing up to provide for those in need. In January, Gehad saw another poignant example of that need as Afghan refugees started arriving at Zaman.

“There was a woman holding a little baby less than two years old who had no socks and no shoes. It was probably about 10 to 15 degrees outside,” Gehad said. “That's what drives me to this organization. We continue to realize there's a need out there, whether they're a refugee or somebody in our community in need, there's always going to be a need for Zaman.”

For emcee and another long-time Zamanitarian Tarik Turfe, the organization continues to resonate with him as it has grown from the early days of Najah working out of the back of her van to become a mainstay in the region’s nonprofit community.

“Zaman now graduates people out of the cycle of poverty,” Tarik said. “As Zaman grows and it reaches so many more throughout the Metro Detroit region, you are all contributing to the mission of advancing the lives of marginalized women and children.” 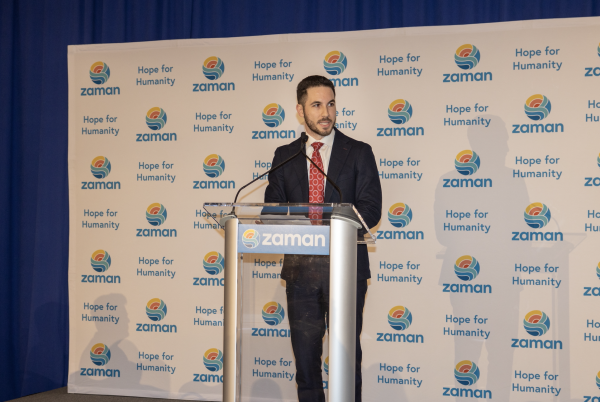