“Ask me about Zaman.”

“It’s a great conversation-starter,” said team organizer Ali Bazzi of the team’s catchphrase. “People see ‘Ask me about Zaman’ on our shirts and it piques their interest. They ask us what it means, and it gives us the perfect opportunity to tell them about Zaman and all the amazing things it does for the people of Metro Detroit.”

Already 45 members strong, the Zaman Detroit Run Team formed just a few months ago, immediately following Zaman’s Sixth Annual Walk4Humanity on Sept. 14. A “Zamanitarian” since 2007 and a running enthusiast since 2012, Bazzi was approached by Zaman Founder and CEO Najah Bazzy about the formation of an official running club that could raise awareness about the organization. The idea was met with enthusiasm, and the club’s roster grew quickly.

“The run team was created to serve a dual purpose,” said Bazzi. “First, there was a need in our area for a group that runners could join to motivate one another and help one another improve, train for events, or just attain personal fitness goals. But there was also a desire to organize for a cause. Zaman has a strong presence among the clients it serves and within the business and philanthropic communities, but we felt there was an opportunity to raise awareness among the general public about its work on behalf of the area’s most disadvantaged. The easiest way to engage people is in everyday conversations on the ground as we’re out training.”

Team member Mariam Mroueh said the run team offers “a strong and intimate sense of community that is hard to find.”

“As someone who has been running for the majority of my life, I find being a member makes my training and running goals easier to achieve because I have a whole team of people supporting me,” Mroueh said. “I’ve had the opportunity to meet some really great individuals with kind hearts and strong goals. The variety and experiences of the team has offered me more opportunity to grow and become not only a stronger runner but a better person. The fact that the core of our group is to help Zaman and others makes our running so much more purposeful than running on my own.”

Fahtme Abdallah said joining the run team has helped her in a number of ways. With Bazzi’s assistance, the team connects with area run events, shares useful articles and videos to help with running form, and exchanges tips on local run shops who offer great gear. In addition to these practical perks, Abdallah said, the motivation the team provides can’t be beat.

“It means so much to have such an amazing support system who are always there to push me and help me reach my goals,” Abdallah said. “It’s not always easy to wake up at 7 a.m. on the weekend to go out and run in the cold, but knowing that my team members are out there waiting for me pushes me to go. If it wasn’t for the Zaman Detroit Run Team, I would not make it out there every weekend reaching my goals and setting new ones.”

The run team, which provides meeting announcements and training information on its website [http://www.teamzaman.org] and Facebook page [https://www.facebook.com/TeamZaman], is also dedicated to volunteer work, said Bazzi, adding that its members are quick to mobilize and respond to Zaman’s call for assistance with outreach. The team is planning a trip to Flint this month to deliver bottled water that is being collected in Metro Detroit for distribution to at-risk families, and Bazzi has taken a lead role in helping to plan Zaman’s 2016 Hope for Humanity Run Walk Picnic (formerly Walk4Humanity). The event, which will be held on Sept. 24 at Dearborn’s Ford Field Park, offers a range of family-friendly food, fitness, and fun.  More information about the event can be found at event’s website [http://www.runwalkpicnic.org].

Bazzi said the run team is eager to grow and welcomes walkers and runners of all levels and abilities.

“Come out on the trail with us,” is Bazzi’s invitation to everyone. “We’re here to help you set and accomplish your goals. If you’ve never walked more than a mile before and you want to walk 10 miles, we’ll help you get there. Whatever it is you want to achieve, you’ll have a whole team cheering you on.” 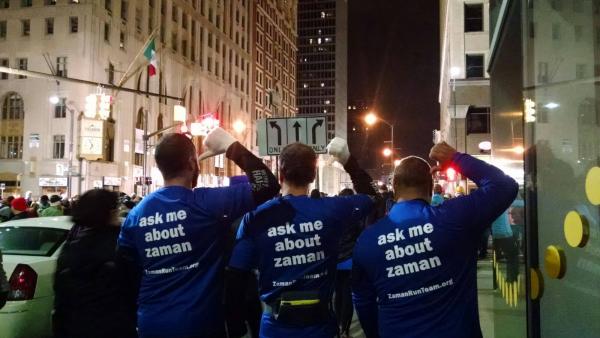