The award, named after former ADC president and nationally recognized civil and human rights advocate Dr. Hala Salam Maksoud, is presented annually to a community leader who has exhibited great leadership, strength and compassion toward the concerns of the community and the mission of ADC. Bazzy accepted the award on Oct. 1 at the ADC’s Annual Gala in Washington DC.

Abed Ayoub, ADC’s director of legal and policy affairs, praised Bazzy as a mentor and teacher for the Muslim Youth Connection (formerly Young Muslim Association), which she cofounded in 1999 to prepare young adults for contemporary society with a focus on social justice and service. He also acknowledged her work to alleviate poverty throughout Metro Detroit through Zaman’s crisis assistance and job skills training programs.

“She embodies the values of Dr. Maksoud,” Ayoub said. “The two share many similarities.”

During her acceptance speech, Bazzy recalled looking up to Dr. Maksoud as a young woman and drawing inspiration from her efforts to dispel common misperceptions about Arab women through articles, lectures, and television and radio appearances.

Bazzy also noted that she is 56 years old – the same age Dr. Maksoud was when she died in 2002 of pancreatic cancer.

“I can’t help but see this as a sign that I’m helping to carry on the important work she started,” Bazzy said. “Cancer claimed her body but not her legacy. That lives on through Zaman and through any organization that shares her commitment to social justice.” 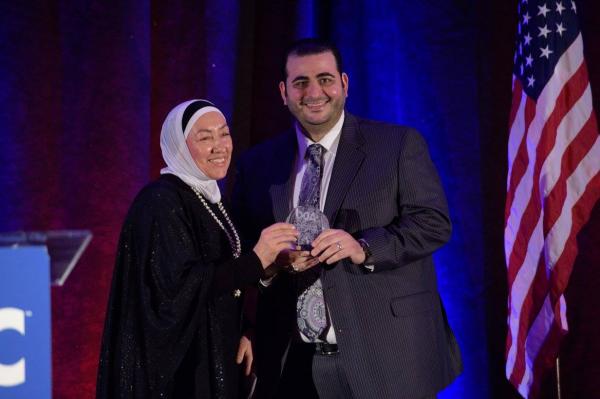