Zaman’s new Culinary Arts Kitchen is gaining visibility as a workforce training and community education innovator thanks to recent television news attention and an upcoming visit by one of America’s most creative pastry chefs.

The state-of-the-art kitchen, which opened in December at Zaman’s Hope For Humanity Center in Inkster, has been featured in two WXYZ broadcasts since it began offering cooking classes for kids and adults early this year. Chef Daniela Mancinelli Abel, who overseas day-to-day operations and curriculum development for the kitchen, visited Action News This Morning in April to show Keenan Smith how to perfect pizza and again in June to teach Jennifer Ann Wilson the trick to great gnocchi. Both foods have been featured in Zaman’s cooking classes, which are taught by Abel and cover everything from easy weeknight meals to a sophisticated Italian supper celebrating an evening in Rome. Adult and children’s class descriptions, prices and registration information can be found here.

Meanwhile, Zaman on July 15 will host a book signing by Stella Parks, the James Beard Award–winning cookbook author of BraveTart: Iconic American Desserts. Trained at the Culinary Institute of America and named one of America’s best new pastry chefs by Food & Wine magazine, Parks will be at the Hope For Humanity Center from 3:30 to 6 p.m. for the signing and a Q&A moderated by Zaman's head chef, Daniela Abel. Tickets for the event, which include a copy of Bravetart and a sampling of desserts featured in the cookbook, can be purchased for $45 here.

In addition to offering classes to the general public, the Culinary Arts Kitchen provides tuition-free culinary arts training to low-income women seeking employment opportunities. Abel is overseeing enhancements to the kitchen’s operations, including the development of vegetable and herb gardens to supply the kitchen and the sale of proprietary food items. Led by David Kalota, a 30-year veteran construction supervisor from the Metro Detroit area, a dozen volunteers in May built up and installed a filtration system in four beds on the center’s grounds. The beds, which are fed with compost from the kitchen, are now teeming with more than a dozen types of herbs as well as carrots, lettuce, radishes, tomatoes, swiss chard, and a variety of peppers – all of which are incorporated into cooking classes or given at no-cost to Zaman’s clients.

The kitchen is also supporting its program through the sale of humus, salsa, and halal stock, as well as protein-packed “Ramadan power muffins” containing dark chocolate, blueberries and oats. All items are available for purchase at the Hope for Humanity Center, although Abel recommends calling ahead to order in light of their popularity.

“It has always been our goal to run a full-circle kitchen that makes the best possible use of our resources and demonstrates the same self-sufficiency we encourage in our clients,” said Abel, who recently represented Zaman as a featured chef at the Inkster Meet Up & Eat Up, United Way Block Party on June 28. “The gardens and the products we are selling from our kitchen both save and generate money that we can use to help lift families out of poverty.” 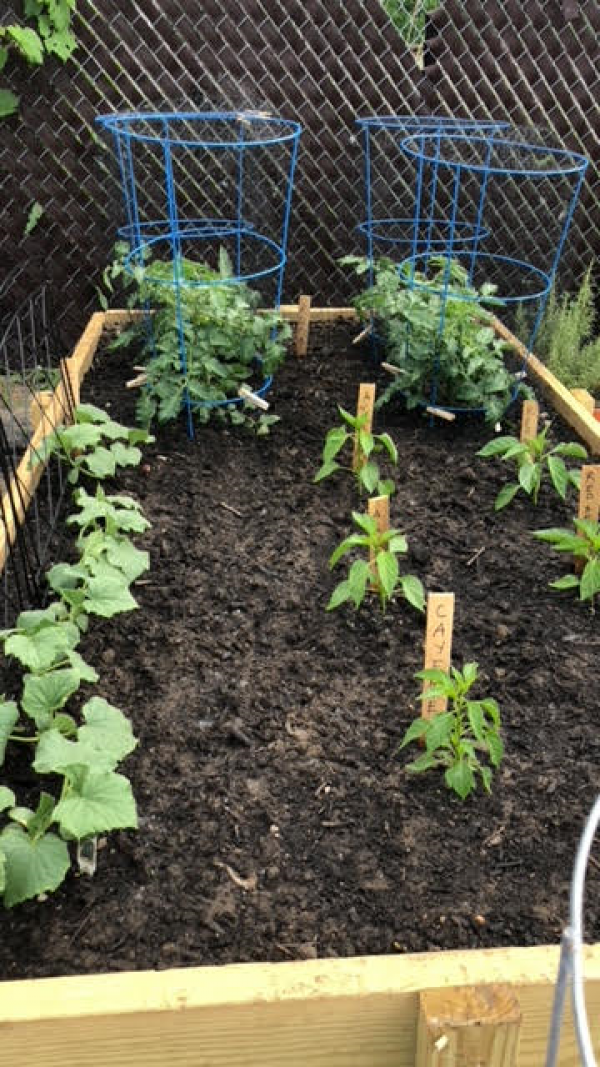