News / Find out what is going on with Zaman
Zaman gives more than 1,700 backpacks to low-income kids with funding from Ford

More than 1,700 kids from low-income homes will head to school this fall with the supplies they need to thrive thanks to Zaman’s recent Back To School Initiative, which was supported by a $25,000 grant from Ford Motor Company Fund.

This is the fourth year that Zaman has partnered with Ford Fund to give kids in grades K through 12 backpacks filled with study staples such as notebooks, paper, pens, pencils, pencil cases and – for high school students – scientific calculators and binders. The backpacks and supplies were purchased by Zaman and packed at the Hope For Humanity Center by members of the Ford volunteer corps, their family members, and members of the University of Michigan–Dearborn’s Lebanese Student Association.

Ford Fund this year expanded Zaman’s role in the Back To School Initiative, having it work with other community leaders preparing kids for the school year. Zaman directed $10,000 of the Ford Fund grant to former Detroit Lions linebacker Brandon Copeland, who used the funds to distribute 750 backpacks to school kids in Baltimore. Ford also asked Zaman to provide Lions safety Miles Killebrew with nearly 200 backpacks to distribute to the Yemeni community in Hamtramck.

The remainder of the funding was used by Zaman to provide 315 backpacks to its own client families, 200 to clients of Detroit-based Matrix Family Services, and nearly 300 to a local initiative called Unity in the Inkster Community to give away at Episcopalooza, a free back-to-school carnival held Aug. 18 at the Dozier Rec Center in Inkster. By availing itself of discounts, bulk rates and other smart shopping strategies, Zaman was able to save enough money to purchase school supplies for all of the women enrolled in its literacy and skills training programs this fall.

The Back To School Initiative began four years ago when longtime Zaman supporter Farah Harb, who serves as global education programs analyst at Ford Fund, arranged for a $10,000 grant to furnish Zaman families with 250 backpacks. Monica Boomer, director of community engagement for Zaman, said the grant’s expansion this year shows that the partnership is growing to the benefit of kids across Metro Detroit and beyond.

“With the help of the Ford Fund, we have been able to support thousands of students throughout Metro Detroit since 2015,” said Boomer, adding that client families were invited to the Hope For Humanity Center on Aug. 15-18 so their kids could choose their own backpacks. “We strongly believe that by providing these children with every opportunity for success, we will move closer to our ultimate vision: ending the intergenerational cycle of poverty.”

Harb said it is “always a great feeling starting the school year off with new backpacks and supplies.”

“At Ford Fund, we believe that education is the cornerstone of future success,” Harb said. “It is the key ingredient for better jobs, prosperity and an improved quality of life.” 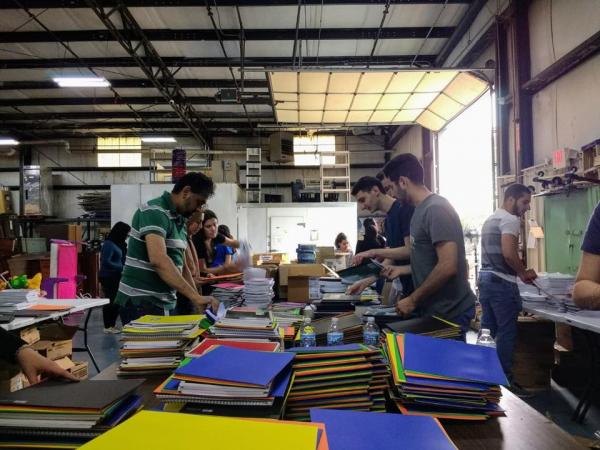